When I went to post my Halloweensie story for Susanna Leonard Hill's 10th annual contest, I realized I hadn't posted anything since the Valentiny one. Which, unfortunately, is an accurate portrayal of my writing life. Since the start of the Covid pandmic, I haven't been able to focus on anything but reality. My creativity is next to nothing.  But I'm trying to put myself back out there.

I've been reading Brene Brown's "Dare to Lead," and I'm finding it calling me to "Dare to Write" again.  In Part 1, the author quotes Amy Poehler and puts my whole writing conundrum into perspective.

"It's very hard to have ideas. It's very hard to put yourself out there, it's hard to be vulnerable, but those people who do that are the dreamers, the thinkers, and the creators. They are the magic people of the world." ~Amy Pohler, Smart Girls: Ask Amy

So here is a story...albeit less than 100 words. I'm also looking for guidance in revising some of my works in progress.  I signed up for a picture book mentor through SCBWI-Midsouth, and I'm anxiously awaiting feedback. I'm staying hopeful for #Pitchwars, and last week I entered #PBcritique fest.

No bones about it, Governor Goblin’s pandemic regulations were tough on every body.

Without ears or a nose, skeleton Kay Daver couldn’t wear a mask in public.

Mummy Dearest desperately needed new dressings, but the mortals had bought out the toilet paper...again.

Their ghoul-friend Ghostie was in quarantine with a temperature of 42.3.

This year the fiends would have to haunt their own houses instead of creeping along the streets.

So Kay, Mummy, and Ghostie spent October 31st on Zoom telling human stories and scaring each other.

It was definitely different, but Halloween 2020 was still spooktacular. 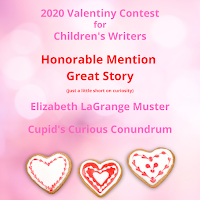 It was February 13th, and Cupid ached all over. He had a fever. He had the flu.

Who could he find to save Valentine’s Day with speed and stealth on such short notice?

Cupid dialed the North Pole. “Of course I can,” Santa said. “Red’s my favorite color.”

“Actually,” Cupid coughed. “You must wear a diaper and sash.”

“Well, then,” Cupid said. “I wonder about Easter Bunny.”

The rabbit said he could skip a day painting eggs. He agreed to wear the costume over his fur. But how would his paws hold the bow and arrow?

Next Cupid dialed Tooth Fairy. She was small. She was fast. She was perfect for the job.

However, she refused to deliver candy. “Too much sugar equals too many cavities. I’d be overworked, and I’d go broke.”

With all his friends now on the line, Cupid explained. “I need Santa to deliver the candy. Easter Bunny can make valentines. And Tooth Fairy, you will fly around with the bow and arrow.”

They all agreed. In fact, from then on they helped each other. Working together made the holidays even more special.
Posted by Elizabeth LaGrange Muster at 5:38 PM 8 comments:

This (very short) story is for Susanna Leonard Hill's 9th Annual Halloweensie Writing Contest.  You can find out more about the contest here: https://susannahill.com/category/halloweensie-contest/

Wanda swept until her abode was spotless. The next morning, the webs reappeared. Was it a trick?

While taking a walk, Wanda encountered an eight-legged friend. “What’s happening?” she asked.

“You ruined my friends’ mosquito-catching nets,” replied the spider.

“Let’s make a deal,” said Wanda. “Your friends can catch my mosquitoes if they help me decorate.”

The spiders wove welcome signs. Every trick-or-treater oohed and aahed over Wanda’s cobweb decorations. And the spiders were happy and full.
Posted by Elizabeth LaGrange Muster at 1:55 PM 1 comment:

I’m grateful for these days
When writing is my work
A toddler, my only pupil
The playground is our classroom


And the minutes make memories

Posted by Elizabeth LaGrange Muster at 5:54 PM No comments:


So I wrote my very first picture book in second grade and it won an Indiana Young Author's contest.  It was called "Did I See a Leprechaun or was it a Dream?"  I've had this idea in my head for a month now, and finally had time to write it down.  Let me know what you think.

She searched and searched the kitchen and couldn’t find one anywhere.  Strange, she thought.
There was one more left last night after dinner.  Maybe Momma ate it. But Momma was still asleep.

Then Brianna heard a noise coming from the refrigerator.  Was it her little brother, Benny?
No. Benny was still asleep too.

Curiously, Brianna opened the refrigerator door and found -- a leprechaun!
The strange little man with bright orange hair sticking out from a under a green top hat
wore a matching green suit.  Brianna thought leprechauns only existed in books and movies.
But here was a real one in her refrigerator! On St. Patrick’s Day at that!

Brianna tapped the leprechaun on the shoulder.  “Can I, uh, help you with something?”

The leprechaun turned around, holding the missing banana.  “I found this strange little rainbow,”
he said. “But some colors are missing.”

Brianna pointed to a bowl of strawberries.  “These are red.”

The leprechaun tapped his chin.  “That might work. Such a dreary day.
Need some sunshine to make a real rainbow. But I have to find a way, or I might get fired.”

“I wouldn’t want that to happen,” Brianna said.  “What about oranges?”

The leprechaun frowned.  “Those look much too big.”

“We can slice them.” Brianna peeled the orange and then the leprechaun carefully cut it.

He popped a wedge into his mouth and juice dribbled down orange beard.
“That even tastes like sunshine.” He grinned.

“We can add some yellow pineapple chunks to the banana,” Brianna said.
“Now we need green.”

“My favorite!” The leprechaun clicked his heels.  “But that’s not green,” he said
as Brianna took a kiwi from the drawer.

“Leapin’ leprechauns!  That’s beautiful!” The leprechaun did a little jig.  When he was finished,
he said, “We still need blue.”

“Blueberries, of course,” Brianna said. “We’ll just rinse these off.  And here’s are some purple grapes.”

(Illustration note: Leprechaun pops a purple grape into his mouth.)

Brianna set out a platter and the two arranged the fruits in arches -- red, orange, yellow, green, blue,
and purple.

“It’s beautiful!” said the leprechaun.  “But there’s something missing.”

“I’m all out of money,” Brianna said.  “And my parents are still asleep. I guess I could go take
some pennies from Benny’s bank.”

“No, no,” said the leprechaun.  “Let’s make our own. I just happen to have the recipe here
in my pocket.”

Brianna dipped a strawberry into Leroy’s concoction.  It was delicious! This was the best
St. Patrick’s day ever.  “Can you stay for breakfast?” she asked Leroy.

Just as Leroy slipped out of the back door, Benny walked into the kitchen.
“Did I see a leprechaun or was that a dream?”

Brianna rubbed her eyes too.  “I’m not sure. But here, have some fruit.”
Posted by Elizabeth LaGrange Muster at 5:32 AM No comments:

I wrote this for a poetry contest, but I'm not going to submit it because I think it’s geared more for parents than for children.  I've gotten some great feeback on 12X12 that helped me improve it, and I may still totally rework it into a picture book from the child's POV. But none of the readers actually believe Maddie Grace asked me if my patience had gone down the drain during bath time. But she did. And the other night she called down the drain to try to find them.


A bedtime poem for a mother and daughter


Come on, Maddie Grace,
get out of the tub.

No, little girl, your
fingers are wrinkly.

Don’t lose your patience.
Is it down the drain?

You’re a silly girl,
and you’re oh so smart.

Ouch! Don’t comb my hair.
No! Not the dryer!

Time to brush your teeth
Yes, morning and night.

Yucky! Blue toothpaste.
Can I spit in the sink?

Come in the bedroom,
put on your jammies.

Not the unicorns,
I want Paw Patrol.

I’m not sleepy yet.
Let’s look for Patience.

It must be hidden
among piles of toys.

Get in the covers.
Let’s say our prayers.

I’m thirsty again.
How about some juice?

No.  Your teeth are clean.
You’ll have to potty.

Let’s snuggle in tight
and tell a story.

The one about pigs
and the scary wolf?

That’s your favorite.
Once upon a time...

Tell me another one.
How about Goldilocks?

I love you lots, Momma.
Did you find your patience?

I’ve found it right now
with you in my arms.

Posted by Elizabeth LaGrange Muster at 4:55 AM No comments:

Last month I signed up for the 12X12 Challenge, and already I have learned so much about picture book writing and myself as a writer.  Someone shared the Valentiny Writing Contest entry information, and I just had to give it a try!


So here is my Valentines story in less that 214 words (205!) in which someone (or in this case, some squirrel) feels guilty!


For more information, check out
https://susannahill.com/2019/02/13/oh-guilty-heart-the-4th-annual-valentiny-writing-contest/

All day Scurry the squirrel searched for a Valentine’s Day gift for his mother.
All the nuts he found were too high, or too small, or too hollow.

“I found Mama the perfect one,” Scurry’s sister, Furry, bragged. “You haven’t found anything?”

Scurry looked at the ground and shook his head.

“What else might Mama like?” Scurry wondered.  He hunted for a grasshopper,
but none were out in this cold weather. A heart-shaped leaf flew away before Scurry could grab it.

Then Scurry spotted a beautiful round nut in Furry’s favorite tree stump. Perfect!

When Scurry returned home later that night, Furry was crying. “I’m sorry, Mama.
I had the perfect nut for you, but now it’s gone.”

“Thank you, Scurry.” Mama patted him on the head.

“Wait a minute!” Furry hopped up. “Did you find that nut hidden in the hollow tree stump?”

“No.” Scurry clicked his front teeth together.

Scurry sobbed. “But I needed a Valentine’s Day present for Mama.”

“I found it first,” screeched Furry.

“Listen, you two. All I need is your love.” Mama hugged Scurry and Furry.
“And for you to always be honest.”
Posted by Elizabeth LaGrange Muster at 6:32 PM 5 comments: